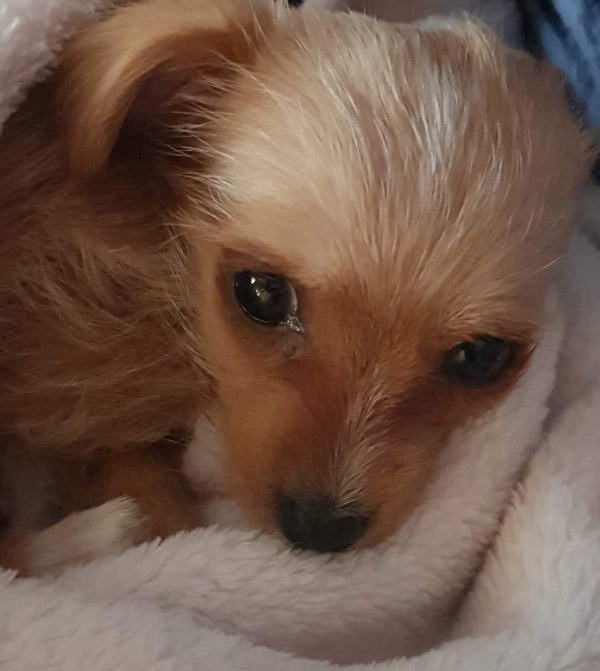 Daisy,
the 10 week old chihuahua
Paulina Majerowska is a 25-year-old, full-time student at Forth Valley College, where she studies early education and childcare. She bought a puppy unwittingly from an illegal breeder and it died just five days later. Her daughter, Anastasia, was left distraught and still points to the sky where she thinks Daisy has gone. She is urging people to look out for the tell-tale signs of illegal breeding that she wishes she’d known at the time. Everything during her purchase of the puppy was rushed but the excitement of buying a new puppy and her cuteness took over. She now wishes she’d paid attention to her worries and walked away from the deal.
“We already have one dog, Timon, who’s two-years-old but we wanted to get another puppy now that we’ve moved to a bigger house with more space. I spotted a Gumtree advert for a Chihuahua and the price seemed great, it was very cheap, but looking back now, this was probably the first sign that something wasn’t right.
‍
“I phoned the seller and had a quick conversation with him before he said to me that he could come to me within the hour as he was apparently in the area already dropping another puppy off. Again, this was another warning sign as I should’ve been able to see the puppy with the mother to see how they interacted together, but I was so taken aback I said yes. It was probably a scripted line he told people all the time as it would’ve been a huge coincidence for him to actually be in the area to drop off another puppy at the same time.
‍
“My three-year-old daughter, Anastasia, was so excited for him arriving with the puppy and we waited by the window for him to arrive. When he arrived, it all felt very rushed and he told us the dog had had injections but as he was walking away from the house, with the cash in his hand, he turned to tell us he’d forgotten the booklet with the documentation. Again, this was yet another red flag but to pull out then, with my daughter so excited, would’ve been so hard but I really wish I had done.
“As he drove off, I’d just spent £350 and my daughter held the puppy in her hand. I was told the puppy was 10 weeks old, but she looked quite unwell."
“We named her Daisy but soon we started to realise things weren’t right. We bought Daisy on March 3rd this year and she died on the 8th as the vet put her to sleep because she was in so much pain. Daisy lost 50g of weight overnight. My daughter saw her being sick and with diarrhoea from the parvovirus and she still mentions it now. And to add to our shock, when we saw the vet, we were told we’d been sold a male dog! I tried calling the person back that we bought from but every time I do, the phone is switched off. When I’m out with Anastasia now, she’ll still mention Daisy and look up at the sky. 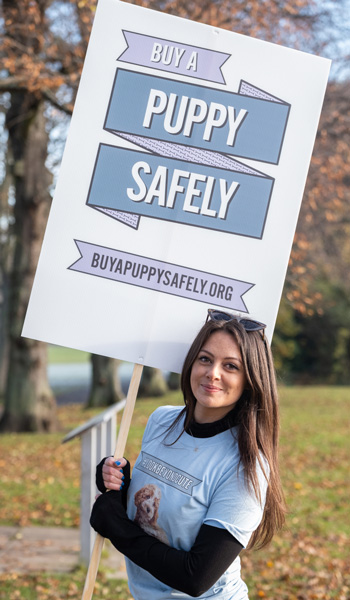 Bella,
The Labrador
Paula Webster from Edinburgh had always wanted a dog and took the plunge when she spotted one she fell in love with through an online advertising site. However, it was immediately clear things weren’t right as soon as she drove back home with her new puppy. Her puppy was yelping constantly, being sick and wouldn’t stop crying. When she failed to settle the puppy in her new surroundings and her behaviour got more and more erratic, Paula decided to drive over 200 miles to take her back. She is urging people to do their research before buying a puppy and understand that if things don’t feel right, walk away and report your concerns to the Scottish SPCA.

“I'd always thought about getting a dog but I was living in a flat, so I had to get permission from my landlord. When they finally agreed to it, I thought the easiest thing to do would be to look on Gumtree.

“I saw one I fell in love with and it seemed perfect because I could get the puppy in two weeks, which looking back now was a major warning sign, getting the puppy so quickly. I had to drive over 200 miles to pick my new puppy up, but I was so excited, it seemed well worth it.
“When I got to the breeder’s house, there were puppies everywhere. The mum looked really ill and was just lying down inside it’s dog crate showing no signs of interacting with her puppies.
“I was told that there were a lot of puppies available immediately but I stuck to the Labrador puppy I’d been looking at and bought her there and then, on the same day I first visited. In hindsight I should’ve been able to visit a few times to see her in her natural environment.
‍
The problems started as soon as I left for home. She was acting crazily, yelping constantly and the drive was really stressful with her crying in the back. These problems went on for a full six weeks and she was always being sick and had diarrhoea.
‍
“By the time I took her to see the vet, I’d named her Bella but the vet was confused by the paperwork we’d been given and couldn’t work out what injections she’d already had. We still couldn’t get to the bottom of her bad behaviour, even when I took two weeks off work to try and help her it wasn’t enough, so I made the tough decision to take her back to the breeder.
‍
“I was lucky that the breeder was contactable and took her back as I know not many are able to do this. When I arrived , the breeder’s behaviour was really weird and she seemed quite shifty before she told us that Bella’s mum had actually died in the time since we’d last been there. In total it cost me around £1,500 and I had nothing but emotional stress.
‍
“My advice to people looking to buy a puppy now would be for them to properly do their research. Don’t get caught up in needing your dog instantly. Be aware of the dangers of online ad sites and the risks that buying your puppy from them can pose. You should really research the breed, the breeder and what to expect. And if you turn up to buy your puppy to a house crammed full of puppies and immediately get a bad vibe, trust your gut and walk away”.
2542
Pawmises
By taking our quiz and learning the signs, you're pawmising to #lookbeyondcute
Take the quiz and pawmise